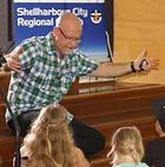 Mark has been in ministry in one form or another for over 30 years - first as a youth worker, then in running a Christian bookstore and then, when there was nowhere left to run, in ordained ministry.

In between those experiences he worked in the automotive industry and as one of the first employed high school SRE teachers.

Mark has been married to Robyn for 34 years, and together they have a history of planting new congregations and new expressions of God's community, and continue to have a desire to see the church renewed and revitalised to be the mission force God longs for us to be.

"For us ministry and mission is a privileged calling. We usually receive far more from those we are blessed to work alongside than anything we might possibly give."

At the very heart of Mark's ministry is a desire to see healthy, vibrant, Christ-centred local churches gathering in as many ways as possible. The church is called to be an irresistible presence, always seeking ways to bring life and health into our communities.

After a 20 career in the NSW Ambulance Service Grahame with his wife Fran took up a position within the Uniting Church as a Lay Pastor in the following placements.

In 2010 Grahame was ordained as a Minister of the Word after 21 years service as a Lay Pastor.
Grahame has always had a mission focus with a strong evangelical heart, this motivated him to take to position at Nimbin with the alternate lifestyle community.

In Jindabyne Grahame grew the chaplaincy programme to the NSW Snow Fields this put Grahame at the forefront of the tragic landslide at Thredbo in 1997.

Grahame has always had unusual ideas about how to outreach to the communities he has ministered in often through some form of chaplaincy.

One of the most innovative projects was the establishment of an opportunity shop in an old government bus at Jindabyne to outreach to outlying villages and communities.

Grahame has an evangelical heart and was one of the inaugural members of the ACC National Council 2006 calling the church back to the basis of its faith and the core issues of faith.

Grahame retired in February 2014
Powered by